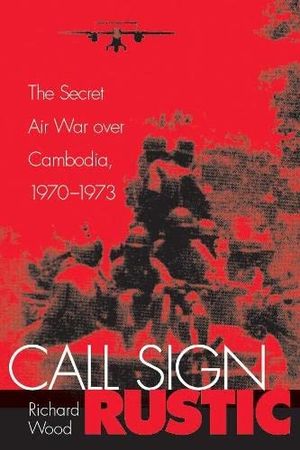 President Richard Nixon could not keep American ground troops in Cambodia beyond June 1970 without authorization from Congress, which was not forthcoming. Not wanting to desert the anti-communist Lon Nol regime, he ordered top-secret, round-the-clock air support over Cambodia, and the Rustics were born.

Author Richard Wood flew as one of the Rustics, a group of forward air controllers who played a major part in staving off both the North Vietnamese and Pol Pot's Khmer Rouge guerilla forces. This three-year air war was so secret—managed directly from the White House—that there are no official records of it. Wood bases his book on his own experiences and those of the other pilots and Cambodians who participated in the operation. He recounts the Rustic's daring missions and portrays the friendships that developed between the pilots and the Cambodian field troops, commanders, and radio operators, who fought with courage and dedication.

The loss of American air support after August 15, 1973 eventually contributed to the fall of Cambodia and the horribly dark period of its history that will live in infamy as “the killing fields.”

Richard Wood
Richard Wood is a retired U.S. Air Force colonel and has logged more than 6,000 hours flying military aircraft. His most recent book is Aviation Safety Programs: A Handbook (1996). He is a consultant specializing in aviation safety and lives in Snohomish, Washington.

Wood has done a fine job of setting out the organizational nature of the Rustic program, identifying the many problems faced by the FACs, examining the pluses and minuses of the aircraft they flew, and documenting the skill and courage of many of the individuals who participated in the often hazardous missions.
—The Journal of Military History