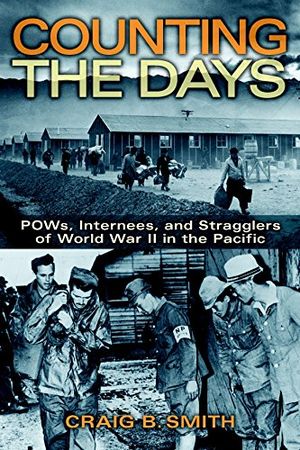 Counting the Days: POWs, Internees, and Stragglers of World War II in the Pacific
by Craig B. Smith
$9.95

Counting the Days: POWs, Internees, and Stragglers of World War II in the Pacific

Counting the Days is the story of six prisoners of war imprisoned by both sides during the conflict the Japanese called the "Pacific War." As in all wars, the prisoners were civilians as well as military personnel. Two of the prisoners were captured on the second day of the war and spent the entire war in prison camps: Garth Dunn, a young Marine captured on Guam who faced a death rate in a Japanese prison 10 times that in battle; and Ensign Kazuo Sakamaki, who suffered the ignominy of being Japanese POW number 1. Simon and Lydia Peters were European expatriates living in the Philippines; the Japanese confiscated their house and belongings, imprisoned them, and eventually released them to a harrowing jungle existence caught between Philippine guerilla raids and Japanese counterattacks. Mitsuye Takahashi was a U.S. citizen of Japanese descent living in Malibu, California, who was imprisoned by the United States for the duration of the war, disrupting her life and separating her from all she owned. Masashi Itoh was a Japanese soldier who remained hidden in the jungles of Guam, held captive by his own conscience and beliefs until 1960, 15 years after the end of the war. This is the story of their struggles to stay alive, the small daily triumphs that kept them going—and for some, their almost miraculous survival.

Craig B. Smith
Craig B. Smith is former president of a global engineering, architecture, and construction firm that has been involved in many major public works projects, including the renovation of the Pentagon before and after 9/11. He is the author of How the Great Pyramid Was Built and Extreme Waves.

These powerful and poignant interviews have been skillfully edited chronologically to present lives before, during, and after the war.
—Publishers Weekly
Counting the Days tracks six prisoners during the Pacific War. Craig Smith has conducted in-depth research and interviews to bring to life their suffering, courage and eventual triumph, creating a compelling portrait of war’s extremes and how these individuals struggled through the darkness to survive.
—James Bradley
Craig B. Smith takes the reader behind the barbed wire and into the jungle to expertly chronicle the resourcefulness and the resiliency of the human spirit through a variety of unique vantage points. As a result, Counting the Days thoroughly captures the complete essence of the POW/internee experience during the Pacific war.
—John D. Lukacs