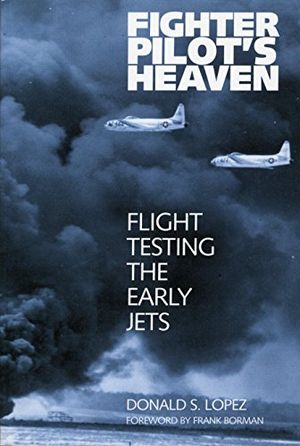 Fighter Pilot's Heaven presents the dramatic inside story of the American military's transition into the jet age, as told by a flyer whose life depended on its success. With colorful anecdotes about fellow pilots as well as precise technical information, Donald S. Lopez describes how it was to be “behind the stick” as a test pilot from 1945 to 1950, when the U.S. military was shifting from war to peacetime operations and from propeller to jet aircraft.

An ace pilot who had served with Gen. Claire Chennault's Flying Tiger Fighter Group, Lopez was assigned at the close of World War II to the elite Proof Test Group of the Air Proving Ground Command. Located at Eglin Field (later Eglin Air Force Base) in Florida, the group determined the operational suitability of Air Force weapons systems and aircraft and tested the first operational jet, the P-80 Shooting Star. Jet fighters required new techniques, tactics, and weaponry. Lopez recounts historic test flights in the P-59, P-80, and P-84, among other planes, describing complex combat maneuvers, hair-raising landings in unusual positions, and disastrous crashes and near crashes. This memoir is peppered with lively accounts of many pilots and their colleagues, revealing how airmen coped with both exhilarating successes and sometimes tragic failures.

Donald S. Lopez
Donald S. Lopez is the deputy director of the Smithsonian's National Air and Space Museum and a former pilot with the 23rd Flying Tiger Fighter Group in China. He is the author of several books, including Into the Teeth of the Tiger (1986).

Fighter Pilot’s Heaven is a you-are-there account of the life every pilot, or aspiring pilot, would love to experience.
—Aviation History
Lopez presents the dramatic inside story of the American military transition into the jet age, as told by a flyer whose life depended on its success. With colorful anecdotes about fellow pilots as well as precise technical information, Lopez interweaves his story with the history of the jet plane. . . [and] peppers his memoir with lively accounts of many pilots and colleagues, revealing how airmen coped with both exhilirating successes and sometimes tragic failure.
—Stars and Stripes
Packed with facts, people, and anecdotes, the book takes the reader aloft in planes with unknown, sometimes deadly characteristics. . . . Excerpts from an actual flight test report provide rare insights and give glimpses of the numerous, often subtle, design factors that are weighed against each other in developing a machine that must defeat its adversaries at high altitudes, high speeds, and crushing G-forces. . . . Lopez’s tales are truly astounding.
—Military
This absolutely delightful book is a must read for anyone with even a remote interest in the adventure of flying in the 1940s.
—Flight