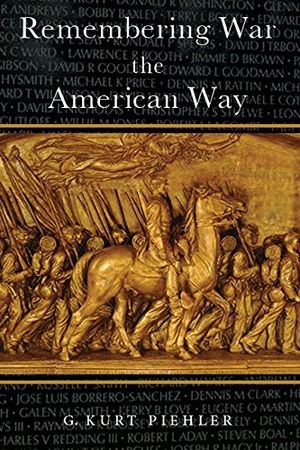 Wars do not fully end when the shooting stops. As G. Kurt Piehler reveals in this book, after every conflict from the Revolution to the Persian Gulf War, Americans have argued about how and for what deeds and heroes wars should be remembered.

Drawing on sources ranging from government documents to Embalmer's Monthly, Piehler recounts efforts to commemorate wars by erecting monuments, designating holidays, forming veterans' organizations, and establishing national cemetaries. The federal government, he contends, initially sidestepped funding for memorials, thereby leaving the determination of how and whom to honor in the hands of those with ready money—and those who responded to them. In one instance, monuments to “Yankee heroes” erected by the Daughters of the American Revolution were countered by immigrant groups, who added such figures as Casimir Pulaski and Thaddeus Kosciusko to the record of the war. Piehler argues that the conflict between these groups is emblematic of the ongoing reinterpretation of wars by majority and minority groups, and by successive generations.

Demonstrating that the battles over the Vietnam Veterans Memorial are not unique in American history, Remembering War the American Way reveals that the memory of war is intrinsically bound to the pluralistic definition of national identity.

A sprightly, informative, insightful, and compelling tale of how we honor those men and women who have made the ultimate sacrifice. Kurt Piehler blends politics, memory, culture, regionalism, race, and religion into a fascinating mix. Recommended without reservation.
—Stephen E. Ambrose
The accounts of the social and political disagreements over the purpose and form of public remembrance synthesize a great deal of heretofore scattered or inaccessible information.
—Library Journal
An important addition to the growing body of literature on the construction and function of the memory of war.
—Journal of American History