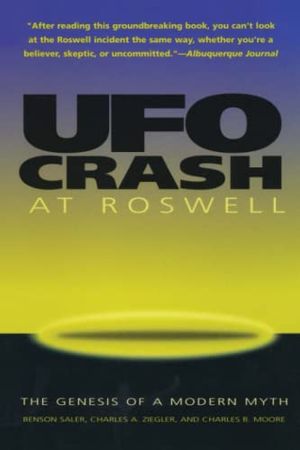 UFO Crash at Roswell: The Genesis of a Modern Myth

In the summer of 1947 something mysterious crashed in the New Mexican desert near the town of Roswell. Whether it was an alien spacecraft manned by tiny humanlike beings or—the US government's official explanation—a scientific research balloon has long been a subject of passionate debate. Transcending the believer-versus-skeptic debate, anthropologists Benson Saler and Charles A. Ziegler contend that the Roswell story is best understood as a modern American myth. They show how the story—and its continual retelling—tap into modern fears about the power of technology, the duplicity of the government, and the power of the media. UFO Crash at Roswell also includes physicist Charles Moore's meticulous account of how 1947 experiments to launch balloon-borne radar reflectors may have led to the Roswell UFO myth.

Benson Saler, Charles A. Ziegler, and Charles B. Moore
BENSON SALER is professor emeritus of anthropology at Brandeis University and the author of Conceptualizing Religion. CHARLES A. ZIEGLER is a senior research associate in anthropology at Brandeis University. CHARLES B. MOORE is professor emeritus of atmospheric physics at the New Mexico Institute of Mining and Technology.

Illuminates an intriguing fact of what it means to be human: to want—to need—stories, tall tales, myths, answers . . . hope.
—San Diego Union-Tribune
A sound case study of contemporary . . . mythmaking, as well as an excellent and objective account of a very curious, and potent, period in American history.
—Journal of American Folklore
UFO Crash at Roswell . . . searches for answers about why so many believe in the crash of a flying saucer at Roswell, how these beliefs came to be, and their meaning. Highly recommended.
—Curtis Peebles
UFO Crash at Roswell persuasively explains the wreckage that is key to Roswell; the later tales of alien intrusion; and the varying assumptions, hopes, and fears that likely motivate these tales.
—Stewart Guthrie
After reading this groundbreaking book, you can’t look at the Roswell Incident the same way, whether you’re a believer, a skeptic, or uncommitted.
—Albuquerque Journal
Thought-provoking reading.
—Anthropological Forum