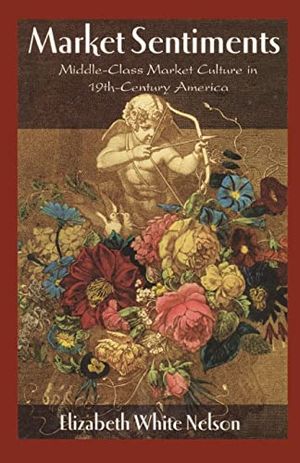 In this brilliant study, Elizabeth White Nelson challenges a central tenet of 19th-century American history: namely, that men and women lived in separate spheres. Women, supposedly, lived lives focused around hearth and home; men focused on trade and commerce. Market Sentiments turns this theory on its head, arguing that the market and parlor sentimentality were closely intertwined for both men and women.

Scholars have long seen 19th-century sentimentalism as a reaction to the rapid expansion of the marketplace, which some feared would threaten their traditional values of thrift, independence, and equality of economic opportunity. But Nelson demonstrates that the rise of sentimentalism and the marketplace were fundamentally linked and, indeed, fueled each other. The invention of Valentine's Day (called “this important Business of Love” by one 19th-century observer) during this era was a prime example of how emotional rhetoric could be economically pragmatic. Not only did people purchase sentimental objects for their parlors—brass candlesticks as spin-off products from Uncle Tom's Cabin, for instance—but they also used sentimental language to explain the profound changes in American culture.

Through her voluminous and ingenious use of sources such as literary bestsellers, fashion magazines, hair jewelry, and the decoration of Victorian parlors, Elizabeth White Nelson shows that, for 19th-century Americans, hearth, home, and the pursuit of cash came together in one big sentimental enterprise.

A wonderful book, imaginatively researched and beautifully written.
—Ann Fabian
Market Sentiments is a pleasure and a profit to read. Nelson connects marginalized and trivialized products—like hair creations and charity fairs—with the most profound concerns of American culture. With a sharp eye for irony, a sophisticated theory of gender, and an impressive amount of research, Nelson opens up a new window on mid-nineteenth-century middle-class material and ideological practices.
—Laura Wexler