Four Wheels and a Board: The Smithsonian History of Skateboarding

A bold look at the creative, controversial, and vibrant history of skateboarding, and the amazing skaters who continually reinvent it.

Skateboarding isn't just a recreational activity, but a professional sport, lifestyle, art form, and cultural phenomenon. The striking book Four Wheels and a Board captures its spirited history, iconic skateboarders, diverse community, and the palpable passion of the people who love it. It includes contributions from the most influential names in the game, including Rodney Mullen, Tony Hawk, Mimi Knoop, and more.

The gorgeously designed book presents objects, artifacts, and photographs from the Smithsonian’s collections that exemplify the vitality and innovation of skate culture. Book chapters are organized chronologically by decade from the '60s to present day, starting with 20th-century surfboards, moving through technological changes, the disappearance of skate parks, the rise of social media and collaborations, and ending with never-before-seen objects from the 2020 Summer Olympics, where skateboarding made its historic Olympic debut.

Largely invented by youth, skateboarding has attracted punks, misfits, and dreamers looking for somewhere to belong. The bookfeatures skateboards and skaters who open dialogues about race, the gender binary, queerness, the displacement of Native people, and so much more, shining a light on people and places not often represented in traditional skateboard history. Four Wheels and a Board is a fresh look at a transformative culture, and one hell of a ride.

Betsy Gordon and Jane Rogers
BETSY GORDON is a co-organizer of Innoskate, a festival celebrating invention and creativity in skate culture, and curated Ramp It Up: Skateboard Culture in Native America at the Smithsonian's National Museum of the American Indian. JANE ROGERS is sports curator specializing in extreme and adaptive sports history at the Smithsonian's National Museum of American History. She curated Everyone Plays! A History of Adaptive Sports and Snowboarding. 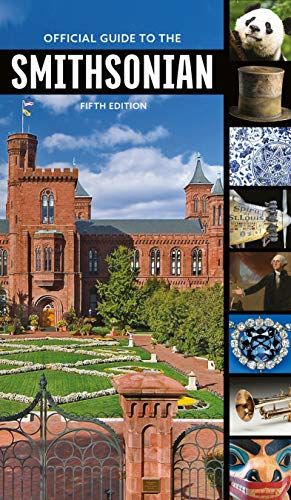 Official Guide to the Smithsonian, 5th Edition
by Smithsonian Institution
$13.99