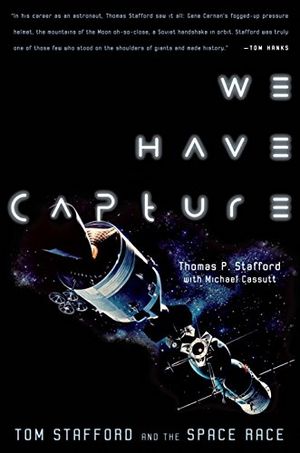 We Have Capture: Tom Stafford and the Space Race

What an amazing career. Tom Stafford attained the highest speed ever reached by a test pilot (28,547 mph), carried a cosmonaut’s coffin with Soviet Secretary Leonid Brezhnev, led the team that designed the sequence of missions leading to the original lunar landing, and drafted the original specifications for the B-2 stealth bomber on a piece of hotel stationery. But his crowning achievement was surely his role as America’s unofficial space ambassador to the Soviet Union during the darkest days of the Cold War.

In this lively memoir written with Michael Cassutt, Stafford begins by recounting his early successes as a test pilot, Gemini and Apollo astronaut, and USAF general. As President Nixon's stand-in at the 1971 Soviet funeral for three cosmonauts, he opened the door to the possibility of cooperation in space between Russians and Americans. Stafford's Apollo-Soyuz team was the first group of Americans to work at the cosmonaut training center, and also the first to visit Baikonur, the top-secret Soviet launch center, in 1974. His 17 July 1975 “handshake in space” with Soviet commander Alexei Leonov (who became a lifelong friend) proved to the world that the two opposing countries could indeed work successfully together.

Stafford has continued in this leadership role right up to the present, participating in designing and evaluating the Space Shuttle, Mir, and the International Space Station. He is truly an American hero who personifies the broadest spirit of exploration and cooperation.

Thomas P. Stafford and Michael Cassutt
THOMAS P. STAFFORD as been awarded many honors, including two Distinguished Service Medals and two Exceptional Service Medals from NASA, and the Congressional Space Medal of Honor. He lives in Florida. MICHAEL CASSUTT has written many books, including DEKE! US Manned Space: From Mercury to the Shuttle (with Donald K. “Deke” Slayton). He lives in Studio City, California.

In his career as an astronaut, Thomas Stafford saw it all: Gene Cernan’s fogged up pressure helmet, the mountains of the moon oh-so-close, a Soviet handshake in orbit. Stafford was truly one of those few who stood on the shoulders of giants and made history.
—Tom Hanks
As American flight commander of the first ever rendezvous-in-space with the Soviets, Tom Stafford started raising the Iron Curtain. A great talent, a great career—and still involved!
—John Glenn
An intimate portrayal of space policy, especially its sometimes cantankerous, sometimes tranquil, but always interesting interactions between USA and USSR.
—Roger Launius